Ellen DeGeneres appeared on The Tonight Show last night and voiced her opposition to Proposition 8, the California ballot measure that would ban same-sex marriage. 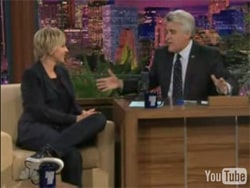 DEGENERES: “They are trying to stop gay people from marrying, like somehow Portia and I staying at home watching Dancing with the Stars is affecting anybody…”

LENO: “I come from Massachusetts, and they’ve had it in Massachusetts for a long time, and it’s fine. The world doesn’t collapse. You know, I go to West Hollywood — people know that it’s the gay area. The nicest area, the cleanest area, the safest area. The economy is falling apart, I don’t care what you do!”

DEGENERES: “That’s exactly right. I look at the people who are losing their homes and they’re foreclosing, and people in Texas who have lost homes. There are so many people that need money right now – and if you’re raising millions of dollars – give it to those people, please, because you don’t need to promote hate.”