Artist Ross Bleckner has put Truman Capote’s former Hamptons saltbox house, which he purchased for $800,000 in 1993 from the Nature Conservancy, on the market for $14.6 million, according to the Wall Street Journal:

“The artist restored and enlarged the home, which is in Southampton’s hamlet of Sagaponack and sits on four acres near the beach, adjacent to a nature preserve. The main house, now 2,000 square feet, has a view of the ocean. There’s also a 1,900-square-foot studio, a two-bedroom guest house, a detached garage and a pool. The author of “In Cold Blood” and “Breakfast at Tiffany’s,” Mr. Capote purchased the Sagaponack home in the early ’60s and was a high-society fixture until he published ‘Answered Prayers,’ an exposÃ© of his wealthy friends, provoking a scandal. He died in 1984 and left the house to his longtime companion, Jack Dunphy, who died in 1992 and left the property to the Conservancy.” 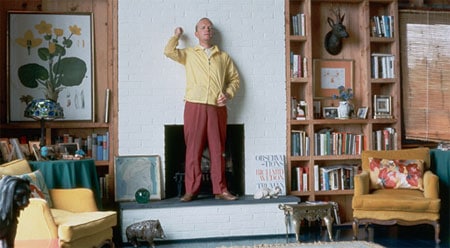 According to DansHamptons: “Capote commissioned the two-story, flat-roofed, saltbox studio near Gibson Beach in 1961. He liked to emphasize that he decorated the home himself: ‘For me it’s a bore to use a decorator…I just don’t care to have someone come in and tell me what I need to live with. I know.’ He would remove his shoes upon entering the house, trying to preserve the highly-polished floor coated with blue boat-deck paint. ‘Truman had his own style,’ continues Clarke, ‘he liked to combine very elegant things with sort of absurd bric-a-brac that caught his fancy. It was characteristically eclectic.'”

Previous Post: « FOX Called on Rachel Maddow for Madonna-Britney Kiss
Next Post: This is What You Call ‘First Base’ in a Reality Show Bromance »