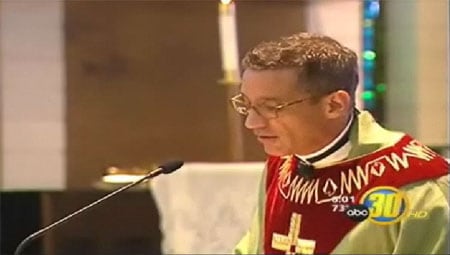 Father Geoffrey Farrow of the Saint Paul Newman Center in northeast Fresno received a standing ovation from half his congregation after offering up a sermon about loving thy neighbor and then urging his congregation to vote against Proposition 8, the California measure that would ban same-sex marriage. He also came out to the local ABC news reporter in an interview following his mass.

Said Farrow to his congregation: “In directing the faithful to vote ‘yes’ on Proposition 8 the California bishops are not merely entering the political arena, they are ignoring the advances and insights of neurology, psychology, and the very statements made by the church itself that homosexuality is innate.”

He added: “I know that these words of truth will cost me dearly. But to withhold them would be far more costly and I would become accomplice to a moral evil that strips gay and lesbian people of their civil rights but of their human dignity as well.”

He said that questions from his parishioners needing direction on how they should vote, as well as his own conscience inspired him to give the sermon and come out of the closet.

Farrow has been an ordained Catholic priest for 23 years.