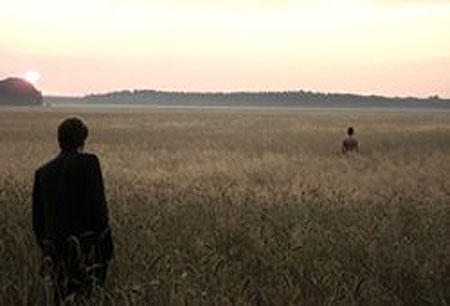 Till Kleinert’s Cowboy (above), a film “about a city dweller and country lad who pay a terrible price for love” has won the top £25,000 prize at the Iris Film Festival in Cardiff, Wales. The award is said to be the largest of its kind for a gay and lesbian film festival. 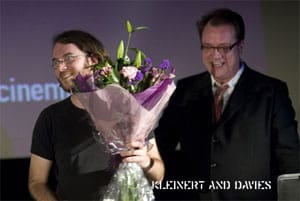 Kleinert was presented the award by Queer as Folk and Torchwood creator Russell T. Davies.

Festival organizer Berwyn Rowlands reports: “This year Cardiff demonstrated to the world that with the support of Iris the city could become a significant force for the world’s lesbian and gay film community. The closing night awards show was totally amazing, with guests from Germany, Israel, Australia, Canada and the US all enjoying our Welsh hospitality. Everyone involved should be very proud of what has been achieved. ‘We’ve already started working on next year’s festival and believe that even bigger and better things are expected of Iris and her friends in 2009! Cowboy is a fantastic film that captured the imagination of the jury and the general public. Till Kleinert is a huge talent. I’m so excited that he will return to Wales to make a new film with his prize.'”

Last year’s winner was a film called Pariah about the coming of age of a lesbian teen.

Watch a clip of short films from this year’s competition, AFTER THE JUMP…