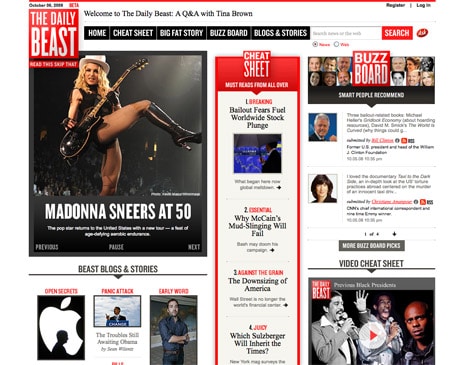 The site is named after the fictional tabloid in Evelyn Waugh’s 1938 novel Scoop.

In a Q&A on the site, Brown is asked if she’s doing this because she’s jealous of Arianna Huffington. Says Brown: “Not entirely, though I have always followed Arianna’s career with the liveliest interest. She is a very old friend, going back to when she was at Cambridge and I was at Oxford. I love what she has achieved at HuffPo. And her partner Ken Lerer, another old friend, has also been a total mensch about the birthing of our beast.”

She describes the site as “a speedy, smart edit of the web from the merciless point of view of what interests the editors. The Daily Beast is the omnivorous friend who hears about the best stuff and forwards it to you with a twist.”