We’ve heard it all before, but the news this time, reported by tabloid The Sun, is being picked up by larger outlets: 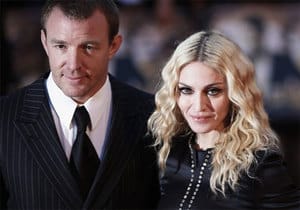 “A statement confirming their marriage is over has been prepared and is set to be released imminently. The couple are going public with their split because they ‘can’t bear to live with the pretence any longer’. They have had a string of shouting matches about the amount of time each devotes to their careers, and over Madonna’s desire to adopt another child. These arguments smashed through their attempts at reconciliation ‘like a sledgehammer’. A highly-placed source told The Sun: ‘It’s very sad. They were a great couple and brilliant parents. They just couldn’t live together any more.’ Pals say Madge, 50, initially wanted to wait until next year to announce their separation — after her Sticky and Sweet global tour is finished. But now she and Brit movie director Guy, 40, want a divorce finalised before Christmas — which would have seen the eighth anniversary of their fairytale wedding in a Scottish castle.”

UPDATE: Liz Rosenberg, Madonna’s publicist, confirms divorce. “Madonna’s spokeswoman said Wednesday that the singer and her husband, Guy Ritchie, will divorce after 7 1/2 years together. A statement e-mailed to The Associated Press from Liz Rosenberg said that the couple had agreed to divorce, and requested the media maintain respect their privacy. The statement, co-signed by Ritchie’s representative, said the couple had not agreed to a settlement.”