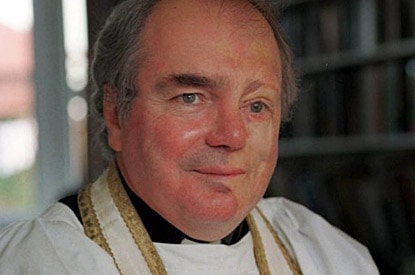 Reverend Peter Mullen, the Chaplain to the London Stock Exchange, is under fire for suggesting that gays be branded with sodomy warning tattoos:

Mullen also called for the banning of gay pride parades, and wrote a poem mocking the recent blessing of the union of two gay priests by Reverend Martin Dudley.

The Evening Standard reports: “The poem begins: ‘The Bishop of London is in a high huff, Because Dr Dudley has married a puff; And not just one puff – he’s married another: Two priests, two puffs and either to other.’ The ceremony, which took place in the summer, was roundly condemned by the Bishop of London, the Rt Rev Richard Chartres, as a breach of Church of England rules.”

Previous Post: « Kristen Wiig and her Petite, Ladylike Hands
Next Post: 10 Years Ago Today, Matthew Shepard was Beaten and Left to Die »