The Proposition 8 battle is being fought on the street in San Jose. After one family claims a ‘Yes on 8’ sign was stolen from their front yard, they replaced it with a huge banner on the front of their house. 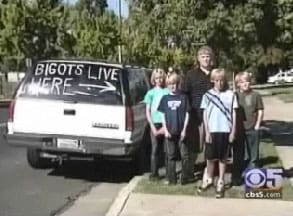 Supporters of marriage equality then parked an SUV directly in front of the house with a sign and arrow on the windshield, indicating “Bigots Live Here.”

CBS5 reports: “The Sundstroms called the police, but an officer told them he couldn’t do much about the car unless it was parked for more than 3 days on the public street. The Sundstroms have taken particular care not to touch or wash off the message, hoping it will just go away without further incident. Even if it is an embarrassment to all who pass by. Michele Sundstrom has had difficulty explaining the van to her children, ‘My 11-year-old asked me ‘What’s a bigot? Is that a bad word?'”

Yes it is a bad word, haters.

Watch the news report. The reporter is so obviously ‘pro-family’.