A jab at John Murtha’s statement last week that some of his constituents were racist momentarily stunned a crowd in Moon Township, Pennsylvania, when McCain flubbed the line and appeared to agree with him. 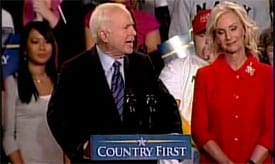 Said McCain: “You know, I think you may have noticed that Senator Obama’s supporters have been saying some pretty nasty things about Western Pennsylvania lately. And you know, I couldn’t agree with them more.”

“I couldn’t disagree with you.”

He then seemed to carry out what has been a theme of the McCain-Palin ticket of late, that some areas of the country are more “pro-America” than others:

“I couldn’t agree with you more than the fact that Western Pennsylvania is the MOST patriotic, MOST god-loving, MOST, MOST patriotic part of America, and this is a great part of the country.”