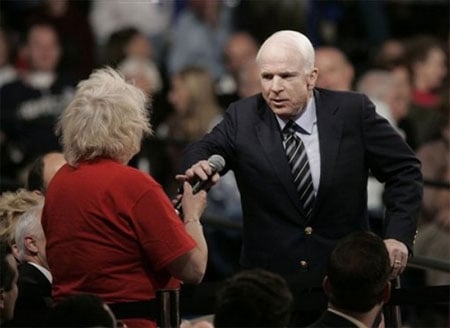 Speaking to campaign volunteers at his Arlington, Virginia headquarters, John McCain acknowledged that he has been hurt by the economy and is a couple points down in the polls, but it was the language he used to describe the upcoming debate that seemed to grab headlines.

Said McCain: “We’re going to spend a lot of time and after I whip his you-know-what in this debate, we’re going to be going out 24/7.”

The remark is made more distinct by events of the last two weeks, in which the McCain-Palin campaign has accused Obama of “palling around with terrorists” and refused to repudiate racist and hateful remarks by its own supporters.

Frank Rich wrote in Sunday’s NYT: “Obama can hardly be held accountable for Ayers’s behavior 40 years ago, but at least McCain and Palin can try to take some responsibility for the behavior of their own supporters in 2008. What’s troubling here is not only the candidates’ loose inflammatory talk but also their refusal to step in promptly and strongly when someone responds to it with bloodthirsty threats in a crowded arena.”

The NYT also published over the weekend an article on Andy Martin, the man who is behind the falsehood that has fueled this ugly atmosphere.

At a McCain event on Friday, he tried to tamp down the climate at recent rallies, telling a woman (photo, top) who called Obama an Arab: “No, ma’am, he’s a decent family man citizen that I just happen to have disagreements with on fundamental issues, and that’s what this campaign is all about.”

However, that statement came after weeks of campaigning in which McCain and Palin had been insinuating just the opposite. And it appears that McCain’s still talking the talk. Speaking with WSLS in Roanoke over the weekend, McCain refused to repudiate remarks by the chair of the Republican party in Virginia to Time magazine that “Both Barack Obama and Osama bin Laden have friends that have bombed the Pentagon.”

When asked if the comments were appropriate, McCain answered: “I have to look at the context of his remarks. I have always repudiated any comments that have been made that were inappropriate about Senator Obama. The fact is that William Ayers was a terrorist and bomber and unrepentant. I don’t care about that. But, Sen. Obama ought be the candid and truthful about his relationship with Mr. Ayers in whose living room Sen. Obama launched his campaign and Sen. Obama said he was just a guy in the neighborhood.”

Obama last week discussed the Ayers falsehoods and challenged McCain to say them to his face.

AFTER THE JUMP, the Roanoke clip mentioned above, and more ugly racism at a Palin rally in Johnstown, PA…