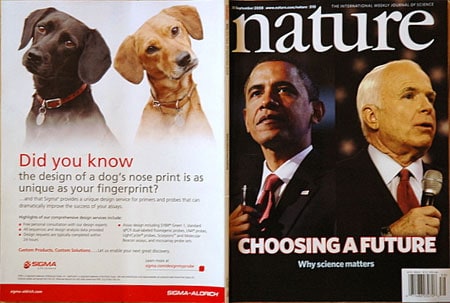 According to David Nather at CQ Politics, Obama approached McCain on the Senate floor last night:

“As the two shared the Senate floor tonight for the first time since they won their party nominations, Obama stood chatting with Democrats on his side of the aisle, and McCain stood on the Republican side of the aisle. So Obama crossed over into enemy territory. He walked over to where McCain was chatting with Republican Sen. Mel Martinez of Florida and Independent Sen. Joseph I. Lieberman of Connecticut. And he stretched out his arm and offered his hand to McCain. McCain shook it, but with a ‘go away’ look that no one could miss. He tried his best not to even look at Obama. Finally, with a tight smile, McCain managed a greeting: ‘Good to see you.’ Obama got the message. He shook hands with Martinez and Lieberman — both of whom greeted him more warmly — and quickly beat a retreat back to the Democratic side.”

On another note, are the front and back covers of September’s Nature (above) a coincidence, or something cooked up in the lab?