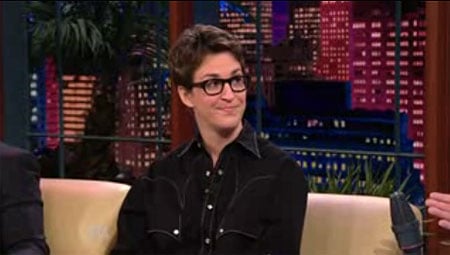 I was looking for this clip last week, but just came across it. MSNBC’s Rachel Maddow appeared last week on The Tonight Show and spoke with Jay Leno about the current election, her frequent guest Pat Buchanan, and McCain running mate Sarah Palin.

On Pat Buchanan: “When he gave that culture war speech in 1992 I felt like he was declaring war on me. Did that make me hate him? No. It made me probably not want to run into him in the dark.”

On Sarah Palin: “Sarah Palin is entertaining. She is not convincing people that she is qualified but we are riveted by her.”

Previous Post: « Bill and Hillary Clinton Campaign with Joe Biden in Scranton, PA
Next Post: Lance Bass: ‘I Don’t Have a Boyfriend’ »