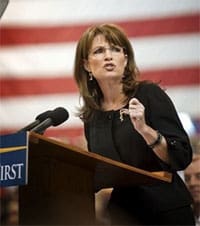 “According to financial disclosure records, the accessorizing began in early September and included bills from Saks Fifth Avenue in St. Louis and New York for a combined $49,425.74. The records also document a couple of big-time shopping trips to Neiman Marcus in Minneapolis, including one $75,062.63 spree in early September. The RNC also spent $4,716.49 on hair and makeup through September after reporting no such costs in August. The cash expenditures immediately raised questions among campaign finance experts about their legality under the Federal Election Commission’s long-standing advisory opinions on using campaign cash to purchase items for personal use.”

Said McCain-Palin spokesperson Tracey Schmitt: “With all of the important issues facing the country right now, it’s remarkable that we’re spending time talking about pantsuits and blouses. It was always the intent that the clothing go to a charitable purpose after the campaign.”

Here are two clips, via The Jed Report, from MSNBC and FOX News:

In other news, last night the AP broke a story about travel expenses for her family:

“Gov. Sarah Palin charged the state for her children to travel with her, including to events where they were not invited, and later amended expense reports to specify that they were on official business. The charges included costs for hotel and commercial flights for three daughters to join Palin to watch their father in a snowmobile race, and a trip to New York, where the governor attended a five-hour conference and stayed with 17-year-old Bristol for five days and four nights in a luxury hotel.”