The McCain campaign really has reached the bottom of the barrel, evidenced by this interview of McCain spokesman Michael Goldfarb by Rick Sanchez on CNN a little while ago. 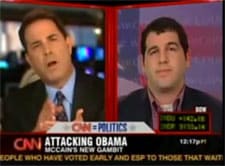 Sanchez calls the McCain campaign out on the hypocrisy of criticizing Obama for his tenuous connections with Palestinian scholar Rashid Khalidi when McCain’s organization gave $448,000 to a group founded by Khalidi.

Then, Sanchez puts Goldfarb in a corner with a simple follow-up question as Goldfarb continues to make accusations that Obama pals around with anti-Semites, and Goldfarb is left, literally, with nothing, nothing to say. Pathetic.