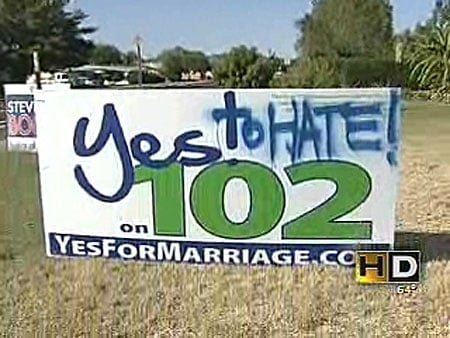 More than 100 campaign signs near Phoenix urging voters to vote yes for an amendment that would define marriage in Arizona as between a man and a woman were themselves amended over the weekend, indicating that a “yes” vote would be a vote for hate:

Watch a report on the incidents from ABC15, AFTER THE JUMP…

Previous Post: « Lance Bass: ‘I Don’t Have a Boyfriend’
Next Post: New York Absentee Ballots Sent Out with Obama Misspelling »