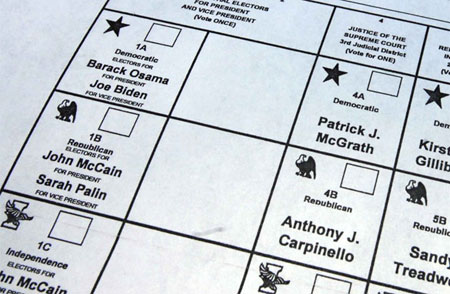 And that typo just happened to result in the name “Osama”.

“Elections officials on both sides of the aisle insist a simple typographical error caused the national embarrassment. ‘It was a mistake innocently done,’ McDonough said. ‘We catch almost everything.’ Republican officials were apologetic. ‘We have three different staff members who proof these things and somehow the typo got by us,’ said Republican Commissioner Larry Bugbee. ‘We really apologize.’…The Obama camp took the controversy in stride. ‘We’re glad officials are working to correct this error and we assume it won’t happen again,’ Obama spokesman Blake Zeff said. McDonough said the absentee ballots with the error went out to voters in Brunswick, Nassau, Sand Lake, Schaghticoke and Schodack. Three voters called to report the error. By day’s end, officials decided to issue new ballots to all 300 voters. They realized some people might cross out the misspelling and write in the correct spelling.”