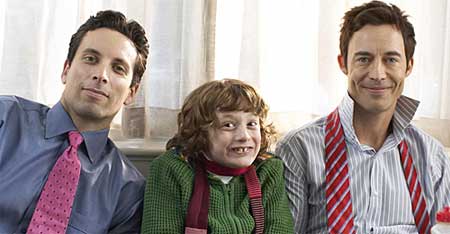 Breakfast with Scot, which opened L.A.’s Outfest this year and is the first gay film in which the NHL allowed its logo and uniforms to be used, opens this weekend.

It has already stirred up controversy. Back in February 2007, San Diego-based Christian activist “ex-gay” James Hartline, called the film, which tells the story of a gay couple (a former Toronto Maple Leaf and the team’s lawyer) who become the guardians of an eleven-year-old boy struggling to understand his sexuality, “degrading” and warned that it promoted the “homosexualization of small children.”

The L.A. Times puts the kibosh on that. They write:

“Ever since Gov. Sarah Palin burst on to the national scene, I’ve heard more than I ever wanted to hear about hockey moms. Are they that different from soccer moms? Do they really wear lipstick? Or can they get away with lip balm or Blistex? I’ve never seen a hockey-mom movie, however. Though last week I did see my first hockey-dad movie. Actually, ‘Breakfast With Scot’ is about two hockey dads, and the only one wearing lipstick is their flamboyant 11-year-old ward, Scot, who winds up living with this comely, strait-laced gay couple after his mom dies. Welcome to the gay family film, as mild and sweet as anything out of the Disney empire.”

It opens on both coasts this weekend, with more releases into October.