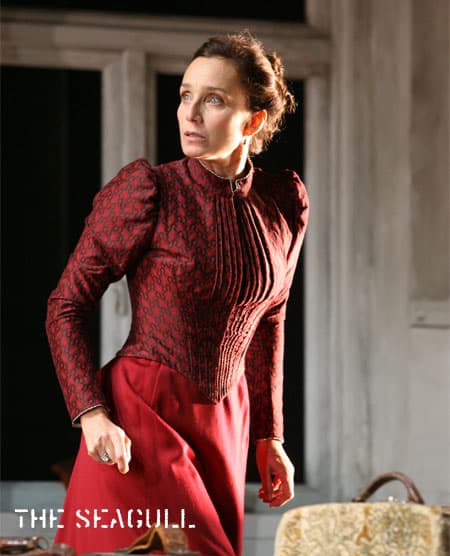 I’m pleased to have Kevin Sessums back to review the theatre for us. If you missed his reviews last year, they’re all archived here. Kevin recently published a somewhat controversial article on J Lo for Tina Brown’s new site The Daily Beast. You can also visit him at Mississippi Sissy, which is the site for and the name of his recent much-lauded memoir. This week he takes a look at two of the hottest theatre tickets in town.

Two of the biggest hits of the last couple of London theatre seasons have finally landed on Broadway this month. Each caused a stampede at their respective box offices because of the star turn at the center of each production. The stars live up to their billing but one production is sublime while the other proves to be much less so. 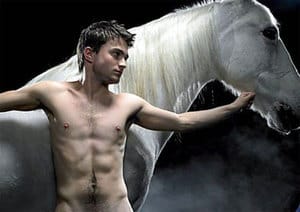 First the disappointing news. Equus was a giant hit back in 1974 when it first transferred to Broadway from the West End with Anthony Hopkins — long before his movie stardom — and Peter Firth starring as the psychiatrist and his seventeen-year-old patient who has been brought to him by a local magistrate after the boy has been arrested for blinding a stable full of horses. The play is by Peter Shaffer who has built a career on the dichotomy to be found when a slavish adherent to the mundane is confronted with the magnificence to be found in a kind of exalted madness. His later hit, Amadeus, has such a concept at its core as does his earlier Royal Hunt of the Sun. Equus, alas, proves to be more of a warhorse of a play — forgive the pun — than a modern classic. Its conceits just haven’t aged well.

Daniel Radcliffe, who plays the disturbed stable boy Alan Strang in this latest production, has aged much better. He gives the best performance of the evening. He is always riveting to watch — and not just in his infamous nude scene at the end of the play. There is a tortured stillness to his performance that is heartbreaking once it erupts at the play’s climax. Richard Griffiths, however, is badly miscast in the role of Dr. Dysart. There needs to be a physical fluidity for any production of Equus to work and Griffiths because of his girth is simply incapable of such physical grace. He does compensate emotionally toward the end of the play but his first act performance was one of the most inert I’d ever witnessed. There is underacting and there is lethargy. He seemed, on the night I caught the performance, to be suffering from the latter. 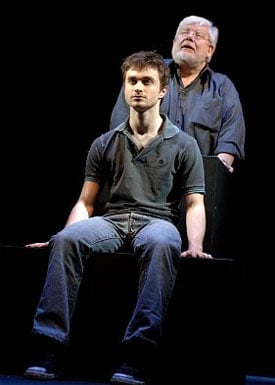 A special raspberry should be reserved for the over-the-top performance of Kate Mulgrew as the magistrate. Perhaps she was compensating for Griffiths’ lack-of-energy but it gave their scenes together a lopsided quality instead of any sort of friendly sexual spark the dialogue often calls for. Anna Camp gives a winning performance as Jill, the stable girl who seduces Allan in the last scene, but the horses were embarrassingly “choreographed” by Fin Walker.

Most of the blame for this production, however, rests with its director Thea Sharrock. The tone, the lighting, and the set were all wrong and served to point up the play’s weaknesses by over-dramatizing its hoary psychological arguments. One could argue whether the play is about homoerotic impulses or paganism, but in this production there are only cheap — and cloddish — theatrical tricks. And those eyes of the horses that literally lit up when being talked about! My own eyes were rolling in my head at that.

But be warned. I bring my own personal history to seeing the play. I portrayed Alan Strang with Tony Perkins back in the 1970s and toured with the play on and off for a year or so. I sat at the Broadhurst Theatre for this production and was able to recite the whole script in my head along with the actors. So take what I’ve written about it all, I guess, with a grain of salt. Nothing could live up in my memory of the crisp, elegant John Dexter production I will always be grateful for being a part of. It was one of the fondest memories of my now long-ago youth. 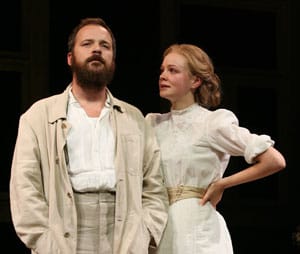 Now for the sublime, the Royal Court Theatre’s production of Anton Chekhov’s The Seagull at the Walter Kerr. At the center of this production is the great Anglo-Franophilian actress, Kristin Scott Thomas in the role of Irina Arkadina. Thomas, who is giving a star turn as the diva who is giving a star turn in her life, keeps her emotional equilibrium onstage while whipsawing the audience from laughter to tears. She’s also in my favorite movie of the moment, the French thriller Tell No One, which The New York Times‘ Stephen Holden describes as “pure, nasty fun.” That’s an apt description as well of Thomas’s take on Arkadina. 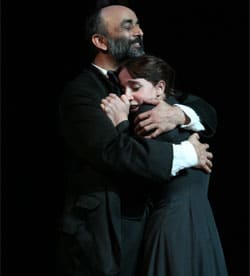 But I’ll let Christopher Hampton, who adapted this version of the play, sum up so much of the appeal of this production when being interviewed by NPR about it. “Somehow we have a tendency to dilute what in Chekhov is quite crisp and quite blunt, actually,” said Hampton. “Chekhov used to be thought of as a lyrical, melancholy kind of writer and he isn’t. He’s a very muscular, energetic, clear, lucid writer. This is the best play that exists about writers and actors.”

This production takes so many of those qualities that Hampton has mined in the original Russian script — the muscularity, the bluntness — and through the, yes, lucid performances of this exemplary cast brings us one of the most pitch-perfect takes on Chekhov’s play I’ve ever seen — including the Mike Nichols directed Shakespeare in the Park one back in 2001 with Meryl Streep in the Arkadina role and the Classic Stage Company’s production this past spring with Diane Wiest as the Russian diva. It’s a tone that is quite difficult to decipher. Indeed, the very first production of The Seagull in 1895 was such a disaster and so rudely received by its audience that the great Russian actress Vera Komissarzhevskaya, who played Nina, the play’s famously disillusioned ingenue, lost her voice during the production. Chekhov himself hid out backstage after the first act and swore never to write another play. It was not until the great director Konstantin Stanislavsky mounted another production of the play at the Moscow Arts Theatre two years later and convinced Chekhov to see it, that the playwright was inspired enough to continue writing. 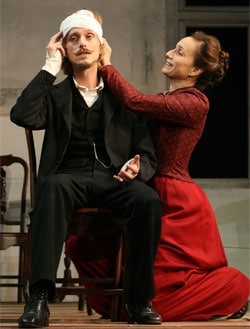 The Nina of this latest production is first-rate, the heartrending Carey Mulligan. She is from the original Royal Court production, as is Mackenzie Crook, who plays Konstantin, the tortured son of Madame Arkadina. Crook, who resembles Wally Cox if he had ever played Kurt Cobain, is one of the strangest looking of leading men and yet also the most compelling. I saw him a few seasons back as one of the inmates in the West End production of One Flew Over the Cuckoo’s Nest that starred Christian Slater. As good as Slater was in that production, it was hard to take one’s eyes off Crook who always crept into one’s line of vision, even when standing completely still. It’s the same quality he has in The Seagull. He’s mesmerizing.

Also outstanding is the young American actress Zoe Kazan as Masha. The night I saw the play she received exit applause in her first scene in the second act. This is the third time I’ve seen Kazan in the last couple of years and she just gets better and better. A major stage actress is developing before our eyes. Peter Sarsgaard is still finding his dramatic legs as Arkadina’s love interest, the middlebrow writer Trigorin. Sarsgaard has a tendency to rely on his patented prissy eccentricity that he so often displays in independent films. He’s not bad just not as good yet as all those who so seamlessly are a part of this splendid ensemble.

If you’ve never seen a Chekhov play, make this your first. If you think you’ve seen too many, convince yourself to see one more and make it this one.

Previous Post: « Soulforce Met with Vandalism, Arrests, at Palm Beach Atlantic U.
Next Post: Guess what Happened to Anita Bryant 31 Years Ago Today? »