A couple of weeks ago I posted about a conflict in the New York Senate (between Democratic leader and marriage equality supporter Malcolm Smith and a group of three “rogue” Democrats lead by Sen. Ruben Diaz Sr. of The Bronx) that was preventing a majority from taking hold. 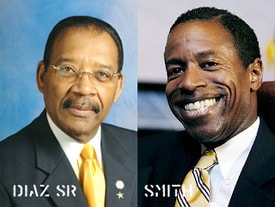 At the time, the New York Post reported: “Gay marriage emerged as a central issue in the fight for control of the Senate yesterday, after a key lawmaker vowed to withhold support from any leader who would push to legalize same-sex nuptials. Sen. Ruben Diaz Sr. of The Bronx – one of three rogue Democrats threatening to spoil the party’s hard-fought rise to Senate dominance in January – called on Democratic leader Malcolm Smith to pledge publicly not to advance the issue. ‘Just give it to me in writing that you will not bring the gay marriage to the floor and you got me,’ Diaz told The Post.”

Today, Reuters published a story on the power struggle: ” Democrats won a majority in the upper house Senate for the first time in more than 40 years in the Nov. 4 election, but three Democratic senators refuse to back fellow Democratic Sen. Malcolm Smith as majority leader without concessions. The Republicans could regain their power in the Senate if the three Democratic senators, who include longtime gay marriage opponent Sen. Ruben Diaz, opt to vote with them.”

What Reuters did not mention was a gay-organized Facebook group that has sprung up online to put pressure Diaz into making nice with Smith. The group, organized by activist and attorney Jeff Campagna, had initiated a campaign resulting in over 3,000 phone calls to Diaz’s office by the middle of last week. Campagna also urged protestors at the ‘Join the Impact’ rally on November 15th to place calls to Diaz right then and there.

Diaz was feeling the pressure, according to the New York Daily News.

Friday it was reported that the “gang of three” were holding a private meeting, and it looked hopeful that Diaz was going to separate himself and support Smith for majority leader.

Yesterday, PolitickerNY reported that Smith and Diaz were buddying up at a Thanksgiving event:

“State Senator Ruben Diaz, Sr. just introduced Senate Democratic Leader Malcolm Smith at a turkey giveaway in the Bronx by saying he wants Smith ‘to be my friend.’ Not just that, Diaz added, ‘I want him to be your friend.'”

The implications for same-sex marriage in the state of New York are enormous. With what looks like a Diaz thaw underway, the group has set its sights on Senator Kruger.