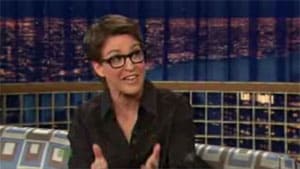 Said Maddow: “I get a lot of mail – some of it hate mail, some of it nice mail – about the fact that I am openly gay. I get straight men writing me emails or sending me letters saying, ‘if I like you, does that make me a lesbian?’…So I always just say ‘yes.’

She jokes, “It’s well-known among gay people if you have any interest in a gay person whatsover, even if you’re not sure they’re gay, that if you’re a man that makes you a woman – check your pants – and you’re definitely gay. It’s nice. It’s meant to be a compliment, but… they’re trying to compliment me and also tell me that they’re not gay. It’s awkward, and then you also get the hate mail where people write in specifically to tell me that i’m gay. As if I didn’t know. Oh my God I had no idea. I’ll get off television. That is the single best thing about coming out of the closet, is that nobody can insult you by telling you what you just told them.”