Elton John and David Furnish (and, according to USA Today, their cocker spaniels Marilyn and Arthur), in New York for Monday’s annual benefit for the Elton John AIDS Foundation, told the paper that gays and lesbians should be happy with civil partnerships and forget the fight for marriage equality. 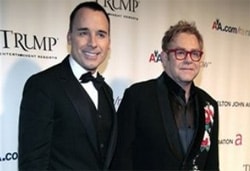 However, as folks in New Jersey in civil partnerships have discovered, separate but equal is not equal. Seems those in Connecticut felt the same way.