Towleroad has learned that moments ago the L.A. County Board of Supervisors voted 3-0 to join in the lawsuit brought by the City of San Francisco and Dennis Herrera asking the Supreme Court of California to overturn Proposition 8. Zev Yaroslavsky, Yvonne Brathwaite, Burke, Gloria Molina were the three Democratic board members voting. The two Republican board members, Don Knabe and Michael D. Antonovich, were absent. 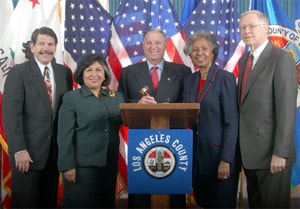 In addition to the 44 state legislators I posted about yesterday morning, additional groups late yesterday offered their support to lawsuits asking the California Supreme Court to overturn Prop 8: “In letters to the court, the Anti-Defamation League and other groups sided with lawsuits that said Proposition 8, which reinstated a ban on same-sex marriage, amounted to a sweeping revision of the state Constitution instead of a more limited amendment…Another letter from the Bar Association of San Francisco and other groups also urged the court to strike down the measure. ‘Because Proposition 8 would shatter existing principles of equal protection and fundamental rights, as well as the judicial branch’s role as final arbiter of these constitutional guarantees, it constitutes a revision of the Constitution,’ wrote the bar, joined by the Legal Aid Society-Employment Law Center, the Lawyers Committee for Civil Rights of the San Francisco Bay Area and the Impact Fund.”