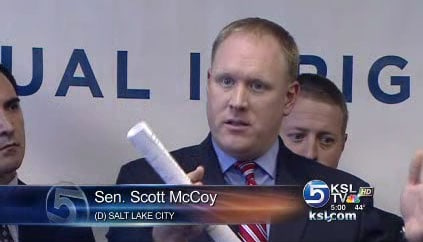 Equality Utah and Utah’s first openly gay state senator Scott McCoy held a news conference yesterday in response to a statement put out by the Church of Latter Day Saints following uproar over the church’s massive funding efforts to pass Proposition 8 in California. 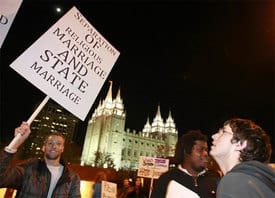 The Mormon Church put out a statement last week in an attempt to soften criticism of its anti-gay marriage campaign that read, in part, that the church “does not object to rights for same-sex couples regarding hospitalization and medical care, fair housing and employment rights or probate rights.”

Said McCoy: “Setting aside the marriage issue for now, there is so much in that space that is short of marriage that we need to talk about; and we’re saying, ‘Let’s talk about it.'”

According to Utah station KSL, “Those issues include rights in medical care and hospital visitation, housing and employment protections, insurance rights for a partner, a statewide domestic partner registry. Repealing the second part of Utah’s Amendment 3 would officially recognize gay couples. Most Utah legislators are not aware of the proposals, a few hesitating to comment until specific bills are available. This group knows there will be questions, resistance, even negative reactions. They’re hoping to create a dialogue based on the common ground they say the LDS Church has laid down.”

Watch the news report and conference clips, AFTER THE JUMP…