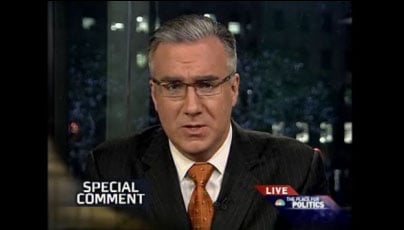 Keith Olbermann delivered an amazing “special comment” this evening devoted to the passage of Proposition 8.

Finally tonight as promised, a Special Comment on the passage, last week, of Proposition Eight in California, which rescinded the right of same-sex couples to marry, and tilted the balance on this issue, from coast to coast.

Some parameters, as preface. This isn’t about yelling, and this isn’t about politics, and this isn’t really just about Prop-8. And I don’t have a personal investment in this: I’m not gay, I had to strain to think of one member of even my very extended family who is, I have no personal stories of close friends or colleagues fighting the prejudice that still pervades their lives.

This is about the… human heart, and if that sounds corny, so be it.

If you voted for this Proposition or support those who did or the sentiment they expressed, I have some questions, because, truly, I do not… understand. Why does this matter to you? What is it to you? In a time of impermanence and fly-by-night relationships, these people over here want the same chance at permanence and happiness that is your option. They don’t want to deny you yours. They don’t want to take anything away from you. They want what you want — a chance to be a little less alone in the world.

Only now you are saying to them — no. You can’t have it on these terms. Maybe something similar. If they behave. If they don’t cause too much trouble. You’ll even give them all the same legal rights — even as you’re taking away the legal right, which they already had. A world around them, still anchored in love and marriage, and you are saying, no, you can’t marry. What if somebody passed a law that said you couldn’t marry?

If this country hadn’t re-defined marriage, black people still couldn’t marry white people. Sixteen states had laws on the books which made that illegal… in 1967. 1967.

The parents of the President-Elect of the United States couldn’t have married in nearly one third of the states of the country their son grew up to lead. But it’s worse than that. If this country had not “re-defined” marriage, some black people still couldn’t marry…black people. It is one of the most overlooked and cruelest parts of our sad story of slavery. Marriages were not legally recognized, if the people were slaves. Since slaves were property, they could not legally be husband and wife, or mother and child. Their marriage vows were different: not “Until Death, Do You Part,” but “Until Death or Distance, Do You Part.” Marriages among slaves were not legally recognized.

You know, just like marriages today in California are not legally recognized, if the people are… gay.

And uncountable in our history are the number of men and women, forced by society into marrying the opposite sex, in sham marriages, or marriages of convenience, or just marriages of not knowing — centuries of men and women who have lived their lives in shame and unhappiness, and who have, through a lie to themselves or others, broken countless other lives, of spouses and children… All because we said a man couldn’t marry another man, or a woman couldn’t marry another woman. The sanctity of marriage. How many marriages like that have there been and how on earth do they increase the “sanctity” of marriage rather than render the term, meaningless?

What is this, to you? Nobody is asking you to embrace their expression of love. But don’t you, as human beings, have to embrace… that love? The world is barren enough.

It is stacked against love, and against hope, and against those very few and precious emotions that enable us to go forward. Your marriage only stands a 50-50 chance of lasting, no matter how much you feel and how hard you work.

And here are people overjoyed at the prospect of just that chance, and that work, just for the hope of having that feeling. With so much hate in the world, with so much meaningless division, and people pitted against people for no good reason, this is what your religion tells you to do? With your experience of life and this world and all its sadnesses, this is what your conscience tells you to do?

With your knowledge that life, with endless vigor, seems to tilt the playing field on which we all live, in favor of unhappiness and hate… this is what your heart tells you to do? You want to sanctify marriage? You want to honor your God and the universal love you believe he represents? Then Spread happiness — this tiny, symbolic, semantical grain of happiness — share it with all those who seek it. Quote me anything from your religious leader or book of choice telling you to stand against this. And then tell me how you can believe both that statement and another statement, another one which reads only “do unto others as you would have them do unto you.”

Just because this is the only world we have. And the other guy counts, too.

This is the second time in ten days I find myself concluding by turning to, of all things, the closing plea for mercy by Clarence Darrow in a murder trial.

But what he said, fits what is really at the heart of this:

“I was reading last night of the aspiration of the old Persian poet, Omar-Khayyam,” he told the judge.

“So I be written in the Book of Love;

“I do not care about that Book above.

“Erase my name, or write it as you will,

“So I be written in the Book of Love.”