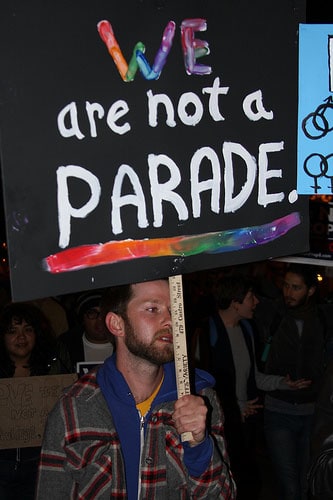 PROTESTS: New Yorkers, there’s a peaceful demonstration THIS WEDNESDAY outside the Mormon Temple in Manhattan at 6:30 pm. Please bring SIGNS and/or CANDLES. There’s a NATIONWIDE action being planned called JOIN THE IMPACT for November 15th. Check HERE for details for your city. There’s also march on Salt Lake City being organized. Protest signs for download.

In case you missed it, earlier today I posted about Drew Barrymore and James Franco joining the Silver Lake protest, and over the weekend posted about the Salt Lake, San Diego, and San Francisco demonstrations.

Weekend marches also included San Jose: “Dozens of gay-marriage advocates gathered Friday in downtown San Jose to protest voter approval this week of a state constitutional amendment that California will recognize marriage between a man and a woman only. ‘Demand resolution, give us back our constitution!’ chanted the crowd of about 75 gay and heterosexual Silicon Valley residents gathered at the Plaza de Cesar Chavez as passing cars honked their horns in approval.” And Sacramento. There were dozens of additional protests all across California. 15 were arrested in Long Beach.

Students in Fresno, 40 of them, blockaded the entrance to City Hall today in protest of the mayor’s support of Prop 8. 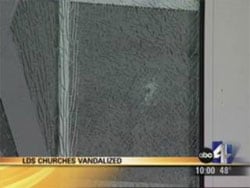 Vandals attack 3 LDS churches in Layton, Utah: “It has happened on the heels of vandalism at LDS church buildings in California that appears to be in retaliation for supporting prop 8, the so called Ban Against Gay Marriage. What investigators were trying to find out Sunday was it the motive in Layton? As LDS Church members arrived for services Sunday morning they were greeted with shattered glass. Julian Berglund said when she saw the vandalism she was scared. ‘Seeing my church where I come every Sunday… it kind of just hurt in a way.’ Julian’s mother, Pat Berglund, said, ‘I feel badly for those people that have such anger within them that they would do something like this… I just hope that people’s hearts will be softened, that they will realize the Gospel… teaches us to love one another and not do things like this.'” 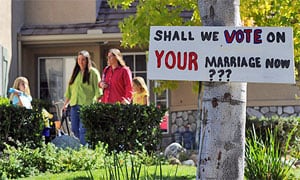 Lesbian couple feels post-election isolation in conservative neighborhood, nails sign to tree: “Shall we vote on your marriage now?”

Protests outside Mormon Temples stop Mormon marriages: “Whenever opponents of Proposition 8, the ballot measure that eliminates the right of gays and lesbians to legally marry in California, protest outside a Mormon temple, they effectively stop church members from getting married, according Levi Jackman Foster, an ex-Mormon who lives in West Hollywood. Foster, a 22-year-old, openly gay man, should know. As the great-great-grandson of Nathaniel Tanner, one of the founders of the Mormon Church, Foster has an intimate knowledge of the Church of Jesus Christ of Latter-Day Saints. The ex-Mormon is also related to Levi Jackman, who surveyed the land where the church created its national headquarters in Salt Lake City, Utah. ‘A temple is the only place (Mormons) can get married,’ Foster says, ‘if they want to get sealed to God.’ A Mormon temple, in other words, plays a vital role in a religion that strongly promotes marriage among its members. ‘Whenever protesters show up,’ Foster explains further, ‘they close the gates (at the temple) so no one can get in. It becomes a convent where no one can get married.'” 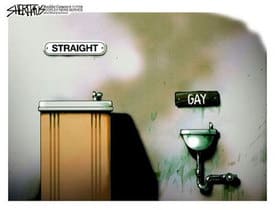 Sorry California, and shame on the LDS church.

Roman Catholic Church in the U.S. thanks its supporters for passing Proposition 8: “Cardinal Roger Mahony of the Archdiocese of Los Angeles thanked his parishioners in a statement he released a day after the election. ‘I am grateful to the Catholic Community of Los Angeles for your commitment to the institution of marriage as fashioned by God and to work with such energy to enshrine this divine plan into our state’s Constitution,’ he said.” Salt Lake City’s Catholic bishop John Wester seconds that.

There was also a protest in Seattle. 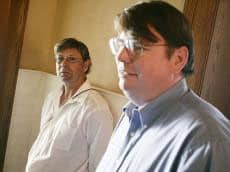 California same-sex couple taking their fight to federal court: “Smelt and Hammer, both 49, went to federal court to force Orange County to marry them in 2004, but the U.S. Supreme Court refused to hear their case. Since then, their federal lawsuit has been in limbo. Now it’s alive again, with a fresh twist: The complaint seeks to have the state constitution, as amended by Prop. 8, be declared unconstitutional under rights guaranteed under the U.S. Constitution, said their attorney, Richard G. Gilbert.”

Officials: 130,000 San Francisco ballots still untallied. “With an expected 20,000 ballots processed per day going forward, the counting will take until the end of next week, maybe longer, according to Arntz, who said he has 400 staff members and temporary workers on the task.”

A CBS News report on the Prop 8 protests and interview with George Takei,
AFTER THE JUMP…