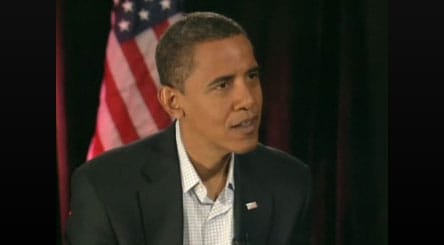 Barack Obama reiterated his opposition to Proposition 8 in an interview with MTV to be aired at 9am today on the network.

Said Obama to Sway in response to a question on the anti-gay ballot initiative: “I think it’s unnecessary. believe marriage is between a man and a woman. I am not in favor of gay marriage. But when you start playing around with constitutions, just to prohibit somebody who cares about another person, it just seems to me that’s not what America’s about. Usually, our constitutions expand liberties, they don’t contract them.”

Obama has said he is in favor of civil unions and leaving marriage matters to the states to decide.