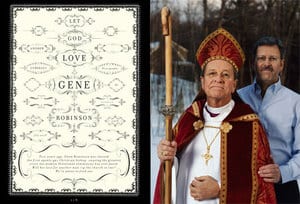 “Bishop Robinson, in London as a guest of the gay rights group Stonewall for its annual ‘Hero of the Year’ awards dinner at the Victoria and Albert Museum tonight, said that Mr Obama’s campaign team had sought him last year and he had the ‘honour’ of three private conversations with the future president of the United States last May and June. ‘The first words out of his mouth were: ‘Well you’re certainly causing a lot of trouble’, My response to him was: ‘Well that makes two of us’.’ He said that Mr Obama had indicated his support for equal civil rights for gay and lesbian people and described the election as a ‘religious experience’. Bishop Robinson described his conversations with him as part of Mr Obama’s ‘extraordinary’ outreach to all religious communities, not just Christian groups. Mr Obama, although not a member of The Episcopal Church to which Bishop Robinson belongs, is a committed Christian with the United Church of Christ.”

Added Robinson: “He is impressive, he’s smart, he is an amazing listener. For someone who’s called on to speak all the time when he asks you a question it is not for show, he is actually wanting to know what you think and listens…We’ve had eight years of someone who has listened to almost no one…To see the tears in the eyes of African-Americans, it’s just been a profoundly, I would say religious, experience, very exciting.”

Robinson said they also discussed the place of religion in the state: “He and I would agree about the rightful place of religion vis-a-vis the secular state. That is to say, we don’t impose our religious values on the secular state because God said so. Our faith informs our own values and then we take those values into the civil market place, the civil discourse, and then you argue for them based on the Constitution. You don’t say to someone, you must believe this because this is what God believes.”