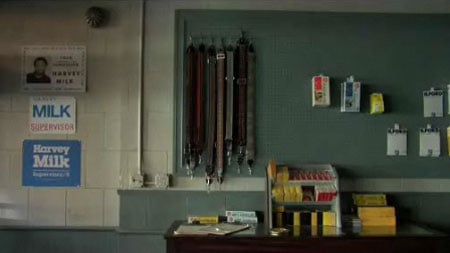 I’m not sure from what interview this story originated, but it’s an interesting companion to this short film by Jenni Olson, shot at 575 Castro, where Harvey Milk’s camera shop and campaign headquarters was recreated for Milk in the same space where it existed 30 years ago.

***
“Director Gus Van Sant claimed that Milk’s spirit turned up at the set recreation of his Castro Camera Shop, where a gift store now stands.

‘The gift store owners were very into the legacy of the store and willing to let us close their shop down and move our set in. They had a mural of Harvey Milk,’ Van Sant said. ‘During a shot at night there was a take where we were using most of the room and there were three or four actors in the scene. Some people were sitting on the sofa which was outside of the shot and during one of the takes somebody walked in from outside and sat down on the sofa during the shot.’

‘After the shot was over, he apparently got up and walked out. The actors were like, ‘Did you see that guy?’ I didn’t see anybody, but they kept describing Harvey, so I figure it was the ghost of Harvey walking into the store for a brief second,” he added.
***

Olson shot the following film on the set, and added the famous Harvey Milk recording that was to be played in the event of his death by assassination.

Ghost or not, Milk’s words have a power that will linger well into the future.

UPDATE: I met Gus at a party tonight (11.19.08) and asked him about the ghost story. He repeated it exactly as above, but it’s just kind of a casual story. Take it for what it is. Everyone has their own mythologies and you’re free to think what you think. It has nothing to do with marketing. I respect the memory of Harvey Milk wholeheartedly. I’m sure Van Sant does too. Milk’s words are beautiful to listen to and should inspire anyone who listens to them. The short film about the camera is beautiful Jenni, and no doubt, though it’s a set, you’ve captured it authentically. Nice work.