Same-sex couples in Connecticut expect to begin marrying today after a court hearing which begins in about an hour. 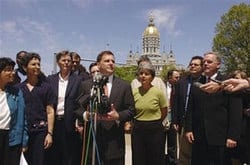 “Superior Court Judge Jonathan Silbert has scheduled a hearing at 9:15 a.m. Wednesday in New Haven to enter the final judgment in the case that allows same-sex marriages in Connecticut. Once the hearing ends, couples can pick up marriage license forms at town and city clerk’s offices. It’s unclear how many couples will get married. The state public health department says 2,032 civil union licenses were issued in Connecticut between October 2005 and July 2008. The Connecticut Supreme Court ruled Oct. 10 that same-sex couples have the right to wed rather than accept a civil union law. Only Connecticut and Massachusetts have legalized gay marriage. The unions were legal in California until voters narrowly passed a ban last week. At least three lawsuits ask that state’s Supreme Court to overturn the vote.”

In last week’s election, voters rejected a proposed Constitutional Convention that might have amended the state’s constitution to banish marriage equality.