In his strongest interview to date on Proposition 8, Governor Arnold Schwarzenegger told CNN’s John King that those same-sex couples already married in California should not worry that their marriages will be nullified, and urged supporters of same-sex marriages to continue the fight given the Supreme Court’s definitive ruling on it in May. He also commented on the reasons why he felt, the measure passed — strong turnout among minority voters and heavy funding by religious groups. I’ve transcribed it below, and AFTER THE JUMP… 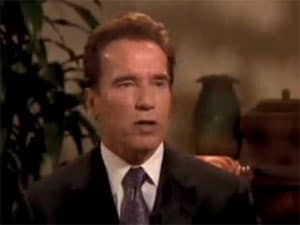 Said Schwarzenegger: “I think that the people of California just again have spoken on this issue and they went against it. Just like in the year 2000 when they voted against it with Proposition 22. They had a very, very strong campaign the pro- Prop 8 people, and I think that the people that tried to defeat it did not have maybe as good a campaign or as much money behind it. Whatever. I think it is unfortunate obviously but it’s not the end because I think this will go back into the courts, this will go back to the Supreme Court because the Supreme Court very clearly in California has declared this unconstitutional. It’s the same as in the 1948 case when blacks and whites were not allowed to marry. So I think that we will again maybe undo that, if the court is willing to do that, and then move forward from there and again lead in that area.”

Schwarzenegger adds: “It’s a cultural issue also, because as you can see because of the big turnout amongst African-American and Latinos, that had an effect also which they did not expect so there’s all kinds of other things that I think the religious groups have done. A big campaign, a lot of them, to support proposition 8 and so on. So it’s a very, very difficult thing.”

He concluded with something of a battle cry: “When I was campaigning for Proposition 11 a lot times the press came to me and said governor why are you doing that? It has failed five times before. Why a sixth time? I said, look. I learn the messages from lifting weights. Sometimes I try to life the weight ten times and I failed, but the eleventh time I lifted it. So I learned that you should never ever give up. And I think it’s the same with this issue. They should never give up. They should be on it, and on it, until they get it done.”