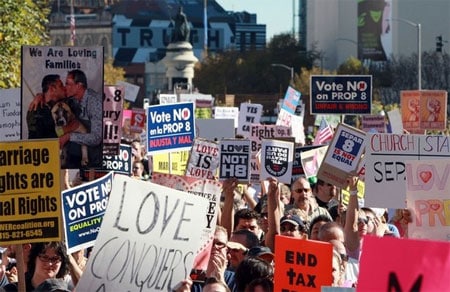 Speculation begins on whether the California Supreme Court’s “swift” timetable for its decision about the validity of Prop 8 is a good thing, or a bad thing, and what’s behind the votes of certain justices:

“The court may hold a hearing on the lawsuits as early as March, a timetable that scholars said was swift considering the complexity and importance of the legal issues. The court’s action, taken during a closed conference, suggested that the court wants to resolve all of the legal issues surrounding Proposition 8, including the fate of existing gay marriages, in a single ruling. It also indicated that at least one of the court’s seven members, Justice Carlos R. Moreno, may be leaning in favor of overturning the measure. Moreno, who joined the state high court’s 4-3 ruling in May to strike down a state ban on same-sex marriage, was the only justice to support granting a stay of the proposition. In a move that puzzled some legal analysts, Justice Joyce L. Kennard, a generally reliable supporter of gay rights, voted to deny review of the Proposition 8 challenges. The court gave no indication of her reasons but said she was willing to hear a separate case on the validity of existing gay marriages. Some analysts said the timeline for a hearing in the spring bodes well for the challengers, while others said it indicated nothing about the court’s leanings.”