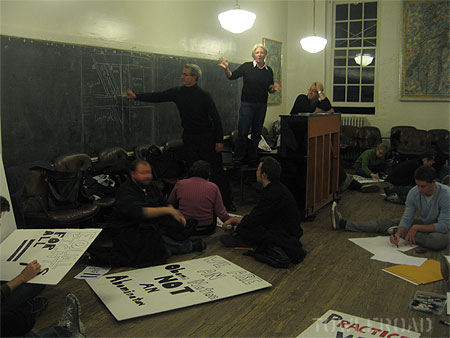 Last night I attended a meeting of NYC protest organizers and marshals in preparation for tonight’s peaceful demonstration which begins at Manhattan’s Mormon Temple at 6:30 pm. The protest was organized in response to the passage in California of Proposition 8 and has taken on the more general demand for equal rights and marriage equality for LGBT citizens across the nation.

According to organizers, who are preparing for a sizable turnout at tonight’s march (at last count there was a “yes” response from over 3,000 on the Facebook page), it will begin at the Manhattan Mormon Temple location, and at some point, as the location reaches capacity, slowly march down Broadway toward Columbus Circle.

Those at the meeting, which happened at New York’s Lesbian, Gay, Bisexual & Transgender Community Center, included Towleroad political director Corey Johnson (below, left), and ACT UP veterans Michelangelo Signorile, Ann Northrop (above), and John Voelcker (above) as well as a large number of folks volunteering to help marshall and guide protestors (watch for them in blue armbands – they’re there to help).

Signorile will be discussing the march, Prop 8, and racial scapegoating on his show today.

Also at the meeting was the creator of the rainbow flag Gilbert Baker, who has designed a huge banner for the protest as well as the armbands that the marshals will be wearing. 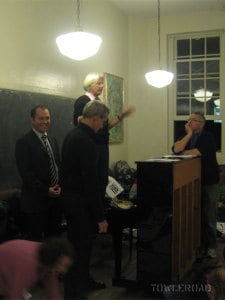 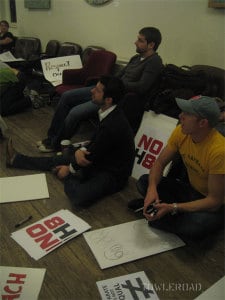 There were a large number of people making signs as well. You are encouraged to bring signs and candles and protest peacefully. I have word there may be a few celebrities attending the protest as well. 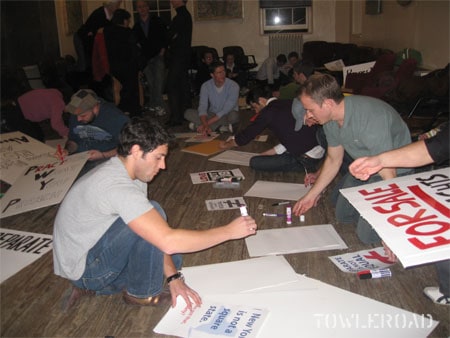 Check out a short clip I took of veteran activist Ann Northrop’s talk to the marshals,
AFTER THE JUMP… 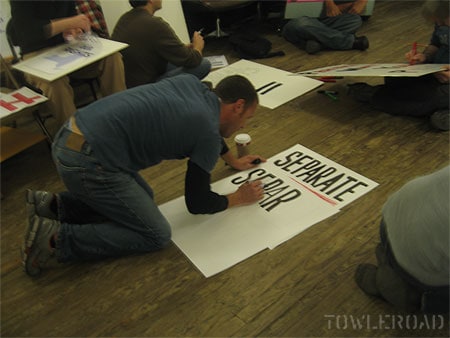 Some of it is inaudible but it gives you an insight into part of what went on last night.