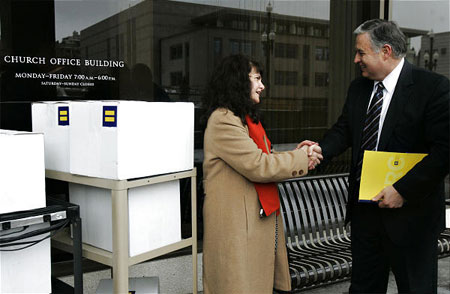 “Members of the Human Rights Campaign abandoned technology for old-fashioned paper and ink after discovering that an e-mail filter was preventing thousands of messages from reaching The Church of Jesus Christ of Latter-day Saints. ‘We wanted to make sure they got there,’ said Jerry Rapier of the Human Rights Campaign. The move was the latest attempt by activists to get church leaders to publicly support the Common Ground Initiative, a set of five bills aimed at securing civil protections for lesbian, gay, bisexual and transgender people. Those measures will come before the Legislature next year…After coming out in support of California’s ban on same-sex marriage, LDS officials said in a Nov. 5 statement on its Web site: ‘the church does not object to rights for same-sex couples regarding hospitalization and medical care, fair housing and employment rights, or probate rights, so long as these do not infringe on the integrity of the traditional family or the constitutional rights of churches.’ The letters delivered Monday asked LDS leaders to ‘give credibility and force’ to those words.”

Previous Post: « Biden, Etheridge Talk Rick Warren as Calls to Dump Him Continue
Next Post: Taking the Pornstache a Step Too Far »