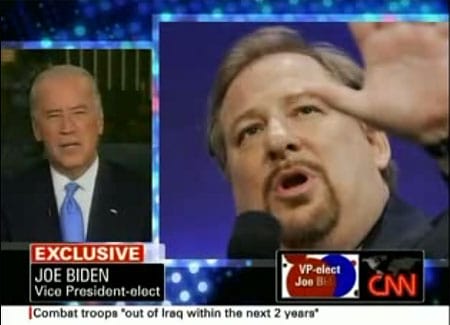 Last night, as I mentioned in a previous post, Vice President-elect Joe Biden appeared on Larry King Live and discussed the Rick Warren controversy. That clip, AFTER THE JUMP…

At the controversy wears on, a united front among LGBT people appears to be slipping away. 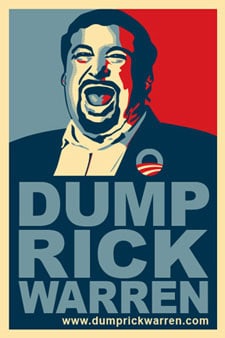 There are groups, like Californians Against Hate, who call for Obama to dump Warren, and have started a Facebook group and website, DumpRickWarren.com, urging the President-Elect to disinvite the anti-gay pastor from the inaugural ceremonies.

And then there are voices here and there, such as Melissa Etheridge, who calls for the extension of an olive branch to the pastor despite policies barring gays from his church and connections he made of gays with pedophilia, incest, and bestiality, though Etheridge has some odd rationalization for her change of heart in a piece in the Huffington Post:

“I told my manager to reach out to Pastor Warren and say “In the spirit of unity I would like to talk to him.” They gave him my phone number. On the day of the conference I received a call from Pastor Rick, and before I could say anything, he told me what a fan he was. He had most of my albums from the very first one. What? This didn’t sound like a gay hater, much less a preacher. He explained in very thoughtful words that as a Christian he believed in equal rights for everyone. He believed every loving relationship should have equal protection. He struggled with proposition 8 because he didn’t want to see marriage redefined as anything other than between a man and a woman. He said he regretted his choice of words in his video message to his congregation about proposition 8 when he mentioned pedophiles and those who commit incest. He said that in no way, is that how he thought about gays. He invited me to his church, I invited him to my home to meet my wife and kids. He told me of his wife’s struggle with breast cancer just a year before mine. When we met later that night, he entered the room with open arms and an open heart. We agreed to build bridges to the future.”

And then there are legislators like Barney Frank, who has strongly condemned Obama’s decision but expresses hope for his presidency and seems willing to, at the end of the day, move on.

IMHO Obama will never dump Warren. He made a GRAVE miscalculation on the invitation, but the political stakes in dumping Warren are so great, I don’t believe it will happen. I believe asking Obama to dump the pastor is the right thing to do, however, and is a direction that should be pursued, but is ultimately a fruitless battle. At the same time, I’m not forgiving like Etheridge. Warren would have to go a hell of a lot further than liking my album (???) for me to suddenly believe he’s one of the good guys. Our voices must not weaken on these issues. It is right to continue to condemn the Warren decision, and it shows that not only must we hold Obama to the promises he made to the LGBT people who helped get him elected, we must demand even more.

It is shameful that Obama’s campaign of “inclusivity” is to get its first national blessing from a man whose ideology is anything but inclusive. It won’t be forgotten until promises, policy, and solid legislation are pursued in the direction of equality for LGBT Americans.

Watch Biden’s clip from Larry King, AFTER THE JUMP…