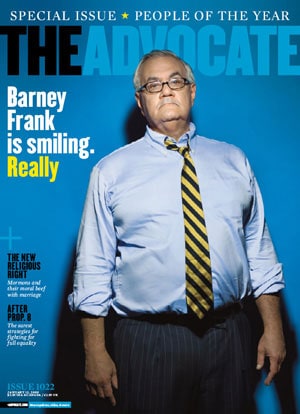 In the piece, Frank discusses his House reprimand for a relationship with a male prostitute who said he ran an escort service out of Frank’s apartment: ” I was not emotionally healthy back when I was closeted. I was very fat, very disheveled, and I now know that job satisfaction is no substitute for personal satisfaction. [The scandal] never would have happened if I wasn’t closeted. When I had this secret, it stopped me from relating to people in a healthy way.”

Frank also talks about what LGBT people should expect in the coming years.

“Once we get out of Iraq, we’ll get rid of ‘don’t ask, don’t tell’. There’s not going to be that much of a fight over that—people are over it. Plus it’s hard to argue today that 20-year-olds freak out at the sight of a gay guy. We will also get hate-crimes legislation with transgender included, and we will get employment nondiscrimination with transgender included — if transgender people keep working for it and lobbying for it. Many people assumed that Nancy Pelosi and I could just deliver that, but that’s not how it works. I think they understand now that they have to go to each congressperson and make the case.”

He’s hopeful on the subject of marriage equality and the defeat of Prop 8: “When the conversation turns to gay marriage, Frank says he is ‘cautiously optimistic’ about Proposition 8 being defeated in California. ‘I just wish more time had passed since it was legalized and this election,’ he says. ‘With discrimination, the fear always outweighs the reality of it. You just hope there’s enough time to show everyone that everything is fine, that gay marriage has no impact on heterosexual marriage.'”

Frank disagrees with protests as a means to achieve that goal: “[Some gay activists] have this notion that Martin Luther King and the rest of the gang just let it all hang out, that the civil rights movement was just a series of spontaneous outbursts. But it was in fact a series of strategic decisions.… I care deeply about [marriage equality], but the more deeply I care, the more sensible I have to be in achieving it…I’ve seen anti-Semitism essentially disappear in my adult life as a social and economic factor. There may be some nuts out there, but generally things are fine. I think the same thing will happen with gayness. We’ll get to a point soon enough where it’s not even an issue anymore. But progress can be slow. I filed my first gay rights bills in 1972 in Massachusetts. Forty years later, it would be nice to have this wrapped up and put to bed.”

Previous Post: « Bode Miller Gets Naked in New York
Next Post: The Best Clip of a Saxophone-Playing Walrus You’ll See All Day »