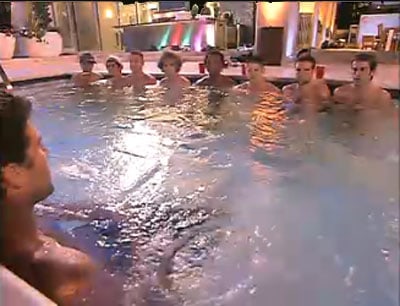 E!’s Marc Malkin reports on Brody Jenner’s upcoming Bromance reality show, in which nine men compete to be the newest member of his inner circle:

“Jenner purposely put his wannabe buddies into some compromising and rather uncomfortable situations because he thinks it forced them to show their true characters. For instance, the elimination takes place as they sit knee to knee in a hot tub. ‘It’s kind of homoerotic and I love people saying that,’ Jenner says in all seriousness, adding, ‘I’m cool with my sexuality and the gender that I like and I have a beautiful girlfriend. That’s why I feel so comfortable with having these awkward guy moments.'”