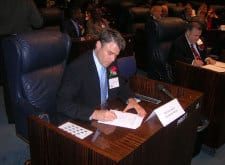 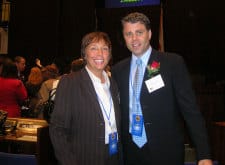 Today, electors around the country cast their votes to officially elect Barack Obama the 44th president of the United States:

“In all 50 states and the District of Columbia, the 538 electors performed a constitutional process to legally elect Democrat Barack Obama the 44th president. More than 131 million voters cast ballots _ the most ever in a presidential election. But Obama’s election is not complete until Congress tallies the outcome of Monday’s Electoral College vote at a joint session scheduled for Jan. 6. Monday’s voting was largely ceremonial, the results preordained by Obama’s Nov. 4 victory over Republican Sen. John McCain. Obama was to win 365 electoral votes, to 173 for McCain. With only Hawaii still to vote, all the electors had cast ballots in accordance with the popular votes in their states.”

In Florida, Chip Arndt and Gena Keebler (above) were among 27 electors in that state to cast their votes at the State Capitol in Tallahassee. However, Arndt and Keebler are the first openly LGBT electors in the state’s history. In August, the Tampa Bay Tribune reported that the state’s electors were “the most ethnically and geographically diverse group Florida Democrats have ever had.”