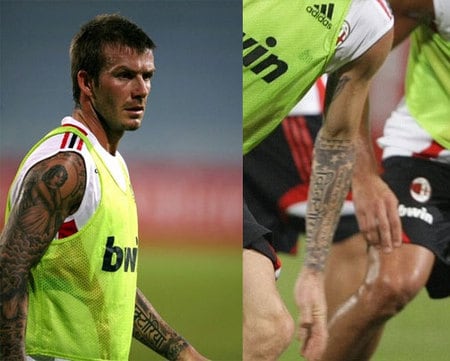 David Beckham has fed his addiction to ink, the Sun reports:

“The new marking on his [inner] left arm is a biblical proverb written in Hebrew. It reads: ‘My son, do not forget my teaching but keep my commands in your heart.’ A source revealed: ‘Victoria doesn’t think David should have any more tattoos and tried to stop him having another. She likes his tatts but wants a bit of his skin to be left, yet David went ahead with it anyway. She is worried he is hooked and she doesn’t know where it will all end. He is a very healthy bloke. He doesn’t smoke, barely drinks and looks after his body very carefully. But his addiction is tattoos. So while his insides are as clean as a whistle, his outsides are quite the opposite.'”