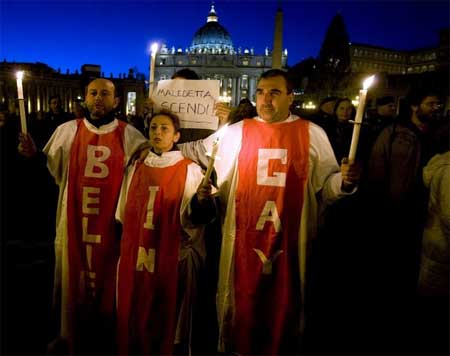 Last week I posted an item about the Vatican’s opposition to a UN declaration formally condemning discrimination against gays. The Vatican feared doing so would pressure nations which do not recognize same-sex unions to do so. The resolution, which the Vatican claims would “de-criminalize” same-sex unions, is set to be introduced by France on December 10th at the UN General Assembly, on the 60th anniversary of the UN declaration of human rights.

On Saturday, hundreds protested near St. Peter’s Square in Rome objecting to the Vatican’s position:

“Some 250 people staged a sit-in by St Peter’s Square on Saturday to slam the Vatican for its opposition to a UN resolution that would decriminalise homosexuality worldwide. Under banners of the two main gay and lesbian advocacy groups Arcigay and Arcilesbica, many held candles and some wore nooses around their necks, dramatising the fact that homosexuality is punishable by death in nine countries…Arcigay president Aurelio Mancuso slammed ‘the bad choice the Vatican has made as a state, not as a church.’ Vatican spokesman Federico Lombardi argued that such a resolution ‘could clearly become a way to pressure or discriminate against those who … consider marriage between a man and a woman to be the basic and original form of social life.'”

An Italian news report on the action, AFTER THE JUMP… 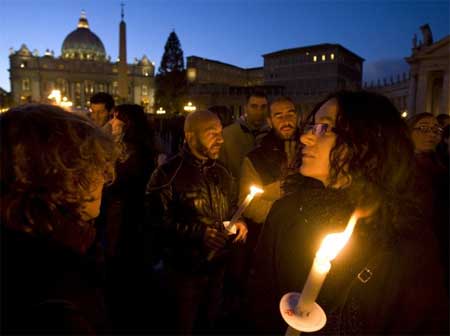