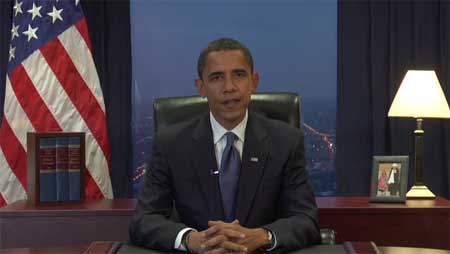 In Obama’s weekly radio address he announced a massive job-creation initiative which included building infrastructure, improving schools, modernizing hospitals, and upgrading energy efficiency across the board.

“Obama said the massive government spending program he proposes to lift the country out of economic recession will include a renewed effort to make public buildings energy-efficient, rebuild the nation’s highways, renovate aging schools and install computers in classrooms, extend high-speed Internet to underserved areas and modernize hospitals by giving them access to electronic medical records. ‘We need to act with the urgency this moment demands to save or create at least 2 1/2 million jobs so that the nearly 2 million Americans who’ve lost them know that they have a future,’ Obama said in his weekly address, broadcast on the radio and the Internet.”

He also appeared on Meet the Press with Tom Brokaw. Obama discussed his appointment of retired Army Gen. Eric K. Shinseki, who retired after questioning Bush’s Iraq policies in 2003.

“Shinseki was Army chief of staff when, during the run-up to the Iraq war, he publicly disputed the Bush administration’s determination to invade with a relatively small force. To maintain the postwar peace in Iraq, Shinseki told the Senate Armed Services Committee in February 2003, ‘something on the order of several hundred thousand soldiers’ could be necessary. Defense Secretary Donald H. Rumsfeld reacted by telling reporters that the estimate ‘will prove to be high,’ and Deputy Secretary of Defense Paul D. Wolfowitz called it ‘way off the mark.'”

Yesterday, we received another painful reminder of the serious economic challenge our country is facing when we learned that 533,000 jobs were lost in November alone, the single worst month of job loss in over three decades. That puts the total number of jobs lost in this recession at nearly 2 million.

These are the questions that keep so many Americans awake at night. But it is not the first time these questions have been asked. We have faced difficult times before, times when our economic destiny seemed to be slipping out of our hands. And at each moment, we have risen to meet the challenge, as one people united by a sense of common purpose. And I know that Americans can rise to the moment once again.

But we need action – and action now. That is why I have asked my economic team to develop an economic recovery plan for both Wall Street and Main Street that will help save or create at least two and a half million jobs, while rebuilding our infrastructure, improving our schools, reducing our dependence on oil, and saving billions of dollars.

We won’t do it the old Washington way. We won’t just throw money at the problem. We’ll measure progress by the reforms we make and the results we achieve — by the jobs we create, by the energy we save, by whether America is more competitive in the world.

Today, I am announcing a few key parts of my plan. First, we will launch a massive effort to make public buildings more energy-efficient. Our government now pays the highest energy bill in the world. We need to change that. We need to upgrade our federal buildings by replacing old heating systems and installing efficient light bulbs. That won’t just save you, the American taxpayer, billions of dollars each year. It will put people back to work.

Second, we will create millions of jobs by making the single largest new investment in our national infrastructure since the creation of the federal highway system in the 1950s. We’ll invest your precious tax dollars in new and smarter ways, and we’ll set a simple rule – use it or lose it. If a state doesn’t act quickly to invest in roads and bridges in their communities, they’ll lose the money.

Third, my economic recovery plan will launch the most sweeping effort to modernize and upgrade school buildings that this country has ever seen. We will repair broken schools, make them energy-efficient, and put new computers in our classrooms. Because to help our children compete in a 21st century economy, we need to send them to 21st century schools.

As we renew our schools and highways, we’ll also renew our information superhighway. It is unacceptable that the United States ranks 15th in the world in broadband adoption. Here, in the country that invented the internet, every child should have the chance to get online, and they’ll get that chance when I’m President – because that’s how we’ll strengthen America’s competitiveness in the world.

In addition to connecting our libraries and schools to the internet, we must also ensure that our hospitals are connected to each other through the internet. That is why the economic recovery plan I’m proposing will help modernize our health care system – and that won’t just save jobs, it will save lives. We will make sure that every doctor’s office and hospital in this country is using cutting edge technology and electronic medical records so that we can cut red tape, prevent medical mistakes, and help save billions of dollars each year.

These are a few parts of the economic recovery plan that I will be rolling out in the coming weeks. When Congress reconvenes in January, I look forward to working with them to pass a plan immediately. We need to act with the urgency this moment demands to save or create at least two and a half million jobs so that the nearly two million Americans who’ve lost them know that they have a future. And that’s exactly what I intend to do as President of the United States.