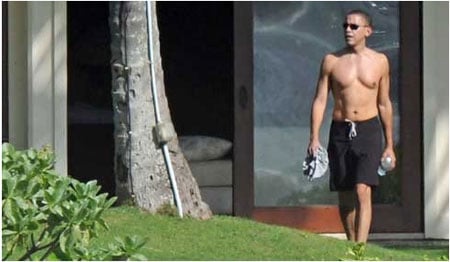 Above, the shirtless Obama shot that’s been making the rounds all day from his vacation in Hawaii. The Washington Post calls it “Pec-tacular”.

And the Rick Warren controversy continues to simmer.

Lesbian Rep. Tammy Baldwin was named an honorary inauguration co-chair this afternoon. Is this just a bone being thrown to the gays as the Warren flap grows? Honorary co-chairs don’t do anything. They’re simply honorary.

The OC Register reports that Warren is to be the keynote speaker at the Martin Luther King, Jr. Annual Commemorative Service at the historic Ebenezer Baptist Church on the day before the Inauguration. How’s that for some civil rights irony?

Americablog reports that anti-gay language which said “someone unwilling to repent of their homosexual lifestyle would not be accepted as a member at Saddleback” has been removed from the church’s website: 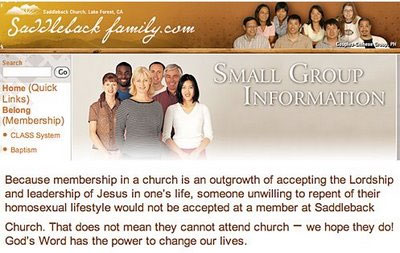 In the Huffington Post over the weekend, Hilary Rosen looks beyond Rick Warren.

And Barney Frank, who said again on Sunday that it was a mistake for Obama to invite Warren, is suffering from “post-partisan” depression.

Said Frank to ‘Late Edition’ on CNN Sunday: “Mr. Warren compared same-sex couples to incest. I found that deeply offensive and unfair. If he was inviting the Rev. Warren to participate in a forum and to make a speech, that would be a good thing. But being singled out to give the prayer at the inauguration is a high honor. It has traditionally given as a mark of great respect. And, yes, I think it was wrong to single him out for this mark of respect.”

Previous Post: « Towleroad Guide to the Tube #404
Next Post: Biden, Etheridge Talk Rick Warren as Calls to Dump Him Continue »