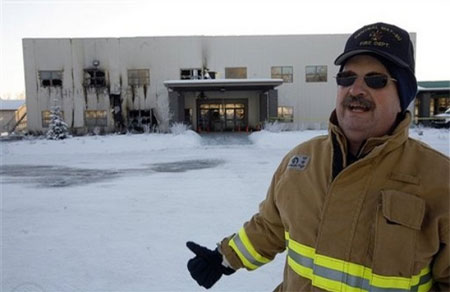 Sarah Palin’s Wasilla church burned over the weekend in an attack by arsonists. Central Mat-Su Fire Chief James Steele said “We have no information on intent or motive.”

Yet the arson attack, which occurred while a small number of people were inside, was linked by news media to “undeserved negative attention” the church received during Palin’s campaign from groups disapproving of the church’s links to “ex-gay” ministries:

“Palin, who was not at the church at the time of the fire, stopped by Saturday. Her spokesman, Bill McAllister, said in a statement that Palin told an assistant pastor she was sorry if the fire was connected to the ‘undeserved negative attention’ the church has received since she became the vice presidential candidate Aug. 29. ‘Whatever the motives of the arsonist, the governor has faith in the scriptural passage that what was intended for evil will in some way be used for good,’ McAllister said. The 1,000-member evangelical church was the subject of intense scrutiny after Palin was named John McCain’s running mate. Early in Palin’s campaign, the church was criticized for promoting in a Sunday bulletin a Focus on the Family ‘Love Won Out Conference’ in Anchorage. The conference promised to ‘help men and women dissatisfied with living homosexually understand that same-sex attractions can be overcome.’ The fire was set at the entrance of the church and moved inward as a small group of women were working on crafts, Steele said. The group was alerted to the blaze by a fire alarm.”

No doubt the NoMobVeto group and other members of the religious right will take this unwarranted connection and run with it.