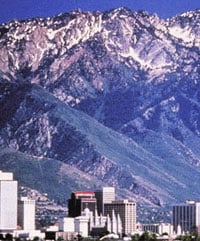 “Police say a 50-year-old man was critically injured in an attack with a bottle outside a Salt Lake City bar and gym that reputedly caters to the gay community — and that may make it a possible hate crime case. The victim told police that he left the 14th Street Gym, near 1400 West and 200 South, after midnight early Wednesday. As he was waiting for a cab ride, the man said someone walked up behind him, swore at him, used a derogatory sexual-orientation slur and hit him over the top of the head with a bottle, police said. The suspect then ran off. The victim, who police said showed signs of intoxication, did not get a good description of his attacker. The victim suffered cuts to his forehead and was ‘bleeding profusely,’ police said. He was transported to an area hospital in critical condition.”

The Deseret News files the same report, adding: “In April, the Utah Court of Appeals reversed a district court’s order revoking the gym’s license based on reported lewd acts committed by gym patrons. The court ruled there was no evidence that the gym or its employees knew of or condoned the acts being alleged.”