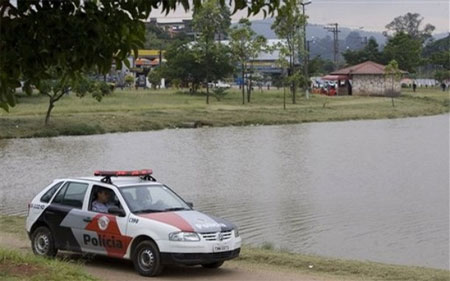 A retired police officer, dubbed the “rainbow maniac,” has been arrested in connection with the murders of 13 gay men in a cruising park in a low-income area of Sao Paulo, Brazil:

“Retired state police Sgt. Jairo Francisco Franco was taken into custody Wednesday night after a witness identified him as the killer of a homosexual man on Aug. 19, said police inspector Paulo Fortunato. Franco is suspected of acting alone in all of 13 killings between February 2007 and August 2008 at Paturis Park, a favorite meeting point for gay men, Fortunato said. The suspect, who worked as a private security guard in a supermarket, has denied the charges, Fortunato said. He added that Franco did not yet have a lawyer. ‘We have a credible witness who says he saw Franco pump 12 bullets into a black gay man inside the park,’ Fortunato said in a telephone interview. A second witness said Franco visited the park frequently, ‘apparently cruising for gay men and victims,’ Fortunato said.”