A week and a half ago the New York Press asked Rufus Wainwright how he felt about Proposition 8’s reversal of same-sex marriage in California, to which the singer replied: 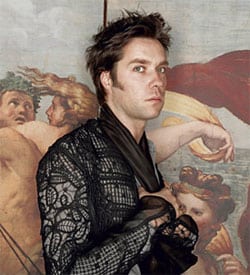 “Oddly enough, I’m actually not a huge gay marriage supporter. I personally don’t want to get married but I think that any law or amendment to the constitution that deals with sex and love should just be banned in general. I don’t think any government should encroach on what goes on in the bedroom at all. Frankly, if you want to marry a dog, why don’t you go ahead and marry a dog, I don’t care. I’m a complete libertarian and so I really disagree with it.”

Wainwright sought to clarify that statement with a blog post of his own yesterday:

“Recently, a quote from an interview was taken out of context and as these things go, it has appeared on many internet sites. So, to set the record straight (or shall we say gay?), I am not nor have I ever been opposed to anyone’s right to marry – straight or gay. I myself just don’t want to at the moment and feel a strong tie to the traditional bohemian concept of being a homosexual, ie: the last thing we want is to be like everybody else. But who knows, a girl likes options. Maybe someday I will want to marry! Plus, in terms of practical issues such as citizenship, taxes, inheritance, etc…it is appauling (sic) that LGBT couples don’t have the same rights and options that other people have and compared with Europe and Canada, the US should be ashamed of how they treat love. I have voiced my strong opposition to Prop 8 on many occasions and will continue to do so until that referendum is reversed. OK? I’ve got to get back to work now. Love, Rufus…”

In other news, Rufus and family appeared on Martha Stewart last week.
Watch it, AFTER THE JUMP…