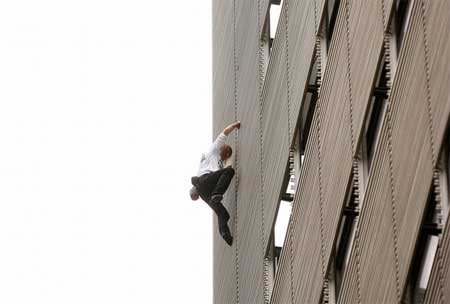 Alain Robert, also known as ‘Spiderman’ for his ongoing attempts (and successes) to climb the world’s tallest buildings, has been sentenced to three days community service at New York’s Gay Men’s Health Crisis and a $250 fine for scaling the New York Times building over the summer.

Robert’s climb was done to draw attention to global warming. While on the building’s facade, Robert hung a sign that read “Global aarming kills more people than 9/11 every week”.

The NY Times reports: “The assistant district attorney, Heather Pearson, had asked Judge Kamins to prevent Mr. Robert from doing his community service with an environmental organization because of the cause he was promoting while climbing the building. ”The defendant has not expressed what I would term as remorse for his actions in this city,’ Ms. Pearson said. She added that, in his grand jury testimony, Mr. Robert gave indications of his intention ‘to climb additional buildings.’ Asked outside the courtroom if that was true, Mr. Robert replied: ‘Not in New York.’ He said he was a bit disappointed with the outcome of the case. ‘I was expecting not having to go for some community service,’ he said. ‘The good thing is I can still do it for some nonprofit organization.’ Mr. Robert is scheduled to return to France on Wednesday, and has until next summer to fulfill his community service in New York.”

Video of Robert’s climb, AFTER THE JUMP… 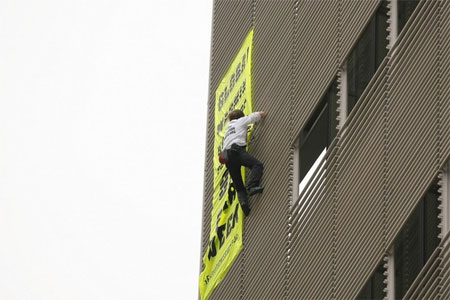