The indictments against Vice President Dick Cheney and former Attorney General Alberto Gonzalez for connections to prison companies running federal detention centers have been thrown out by a judge. 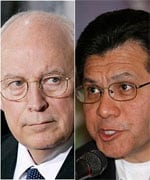 “Willacy County District Attorney Juan Angel Guerra had accused Cheney and the other defendants of responsibility for prisoner abuse. The judge’s order ended two weeks of sometimes-bizarre court proceedings. Guerra is leaving office at the end of the month after soundly losing in his March primary election. ‘I suggest on behalf of the law that you not present any cases to the grand jury involving these defendants,’ Administrative Judge Manuel Banales said in court while ruling that eight indictments against Cheney, Gonzales and others were invalid. He also set a Dec. 10 hearing on whether to disqualify Guerra from those cases. Even in defeat, Guerra saw the outcome as confirmation of the very conspiracy he had pursued. ‘I expected it,’ he said. ‘The system is going to protect itself.'”