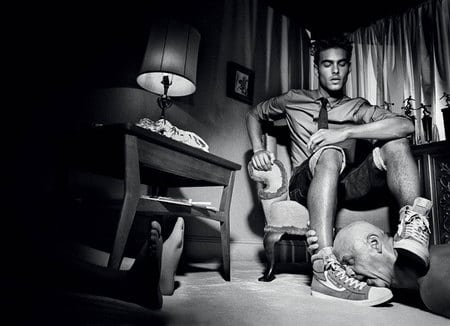 That shot I posted yesterday? It was just part of the shot.

Via WWD: “Diesel is continuing its surrealistic direction in its ads for spring, which will break in February magazines, including GQ, Details, Flaunt and Nylon, as well as outdoors in major cities like New York and L.A. Using black-and-white images shot by John Scarisbrick, the ads center on darkly enigmatic scenes such as an elderly foot fetishist worshipping model Jon Kortajarena’s Diesel high-top sneakers or a ramshackle apartment filled with cats. Rock progeny Alexandra Richards makes a cameo in one of the ads, which were photographed at 1896 Studios in Brooklyn. ‘There are no messages, themes or commentary to understand,’ explained Diesel creative director Wilbert Das of the hipster take on David Lynch. ‘Our objective is to intrigue and provoke a thought.’ As for fall, Das worked with Stockholm-based ad agency FarFar on the new campaign. The cinematic quality of the ads is taken further on the Diesel Web site, where the scenes are turned into short films.”

If anyone can locate a film of the shot above, let me know.