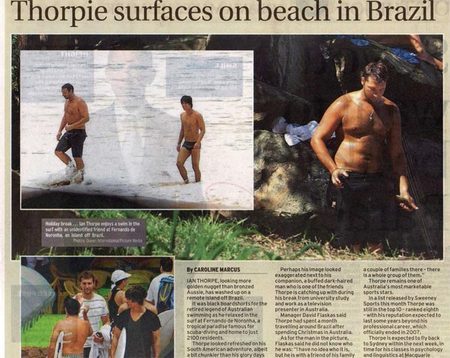 Former Olympic swimming champ Ian Thorpe today responded to insinuations by the Australian media that Daniel Mendes, another swimmer who has been his housemate for the past three years and traveled extensively with Thorpe, is more than just a friend. 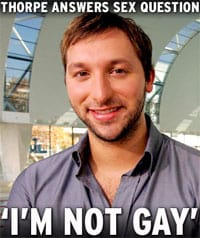 Said Thorpe today: “Over the last few days there have been a series of press articles published speculating about my friendship with Daniel Mendes. I am still friends with many of the people I competed and trained with during my swimming career. Daniel is one such good friend whom I have known for many years. I have only commented on this issue at this time because I draw a line when innuendo implicates people like my family and my friends. I find this kind of inaccurate speculation tiresome and I am annoyed by the hurt it has caused those closest to me. In the past, on several separate occasions, I have openly and honestly with the media. My situation in this regard has not changed. I look forward to myself and those around me receiving the respect and privacy afforded others.”

Previous Post: « Backed into a Corner over Limbaugh, Dick Armey Gets Sexist
Next Post: Ted Haggard on Oprah and Nightline »