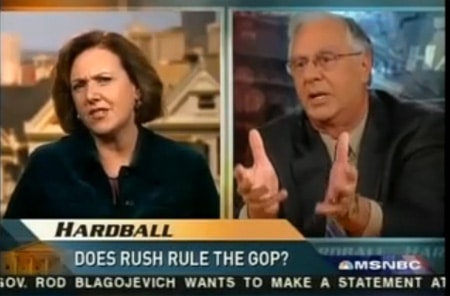 Last Friday, Obama told GOP leaders that they needed to stop taking direction from conservative extremists like Rush Limbaugh: “You can’t just listen to Rush Limbaugh and get things done.” It was a remark that has inspired much discussion, including this one on Hardball where former House Majority Leader Dick Armey gets backed into a corner by Salon’s Joan Walsh and uses the only barb left in his arsenal:

ARMEY: I am so damn glad that you could never be my wife, cause I surely wouldn’t have to listen to that prattle from you every day.

WALSH: Well…boy, that makes two of us sir. That was really an outstanding comment.

Previous Post: « Melissa Etheridge on Rick Warren: We Need to Speak Our Own Truth
Next Post: Aussie Swimmer Ian Thorpe: I’m Not Gay »